Customer Post: Blog post and photos sent in by actual customers. Photos not retouched and blog post not edited for content. (Blog may or may not have been edited for spelling or product clarification).

In 1966 I bought a 1930 Buick rolling chassis for parts I needed to complete another restoration project.

The previous owner had started the chassis restoration by sand blasting it as the rolling chassis and didn’t take off all the shocks steering etc. Next he coated it with a red oxide color primer and finally painting it with POR-15. After removing all the parts I needed and running out of space in the barn, I backed it into my woods behind the barn. There it rested for twenty years until 2016 when I got an inspiration to use the chassis to recreated a 1930 Buick Indy 500 racing car that went through the wall in the 1931 race. Here are the chassis removal photos to help tell the story. 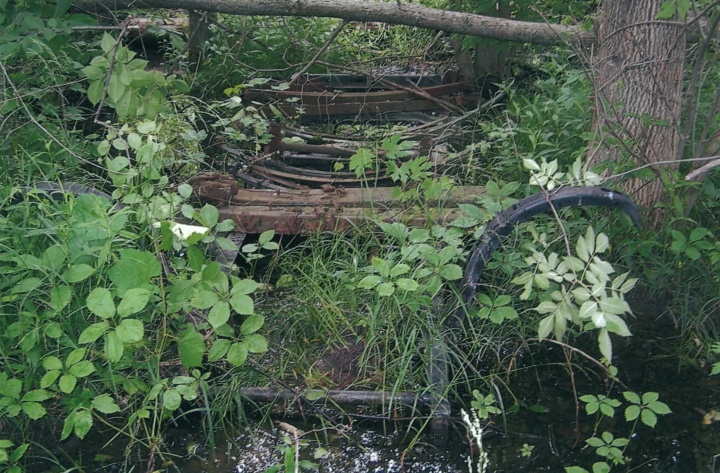 Photo #1 Quietly resting, if you look close you can see the old frame in the muck and half under water. I thought it would be an easy task to drag the old frame out but found out my tractor wouldn’t budge it. After being run out by the mosquitos I rethought the operation and realized I would have to first lift the chassis up out of the muck before I could drag it out.

Photo #2 Armed with mosquito repellant an A Harbor freight chain fall I put on my boots and braved the swamp lifting the thing up from its twenty year grave. 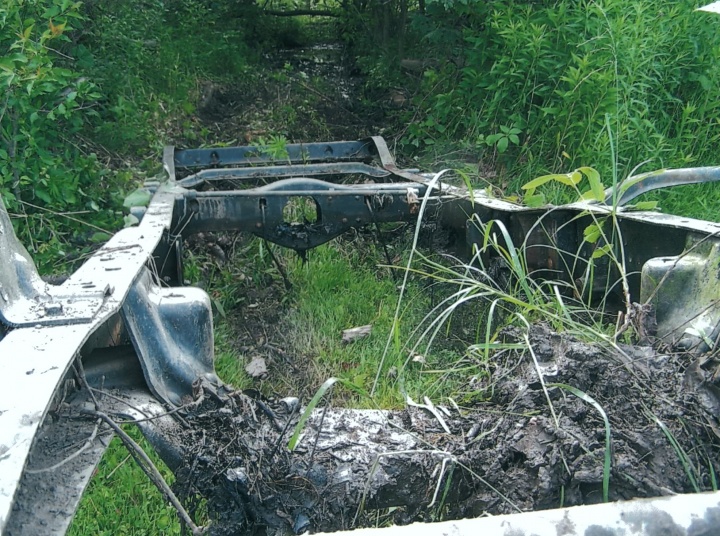 Photo #3 Ya!It came out reluctantly bringing with it swamp life and growing things. 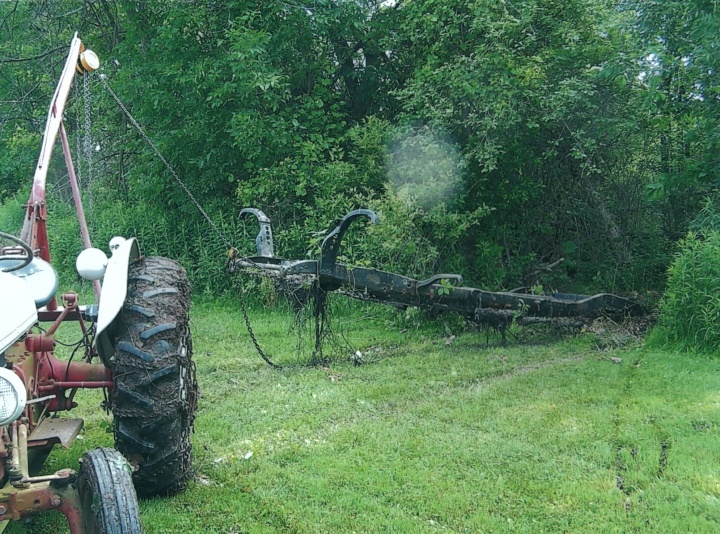 Photo #4 This is where I should have taken off the chain fall as I later found out I bent all the parts inside it rendering it unusable anymore. I now realize that chain falls weren’t meant to drag heavy things. Oh well… 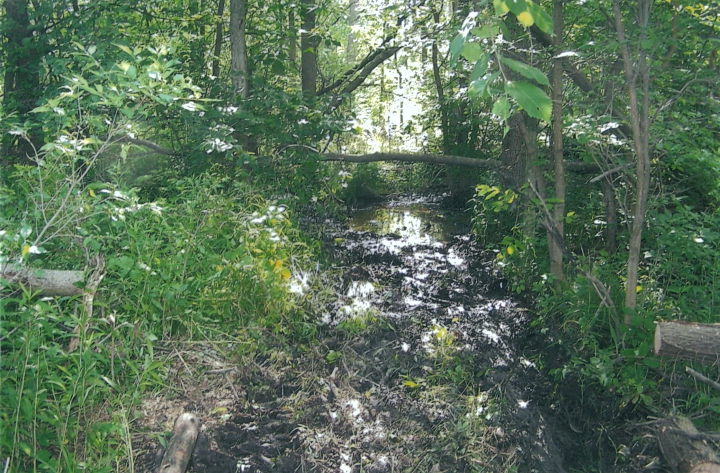 Photo #5 The grave once again quite with the remains of the trees cut down to execute the chassis escape. 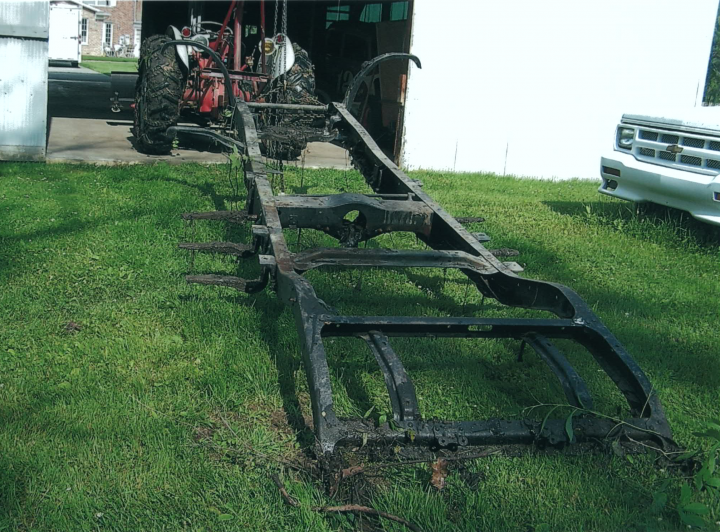 Photo #6 The tractor won out and here you can see what a long wheel base car the old Buick was. 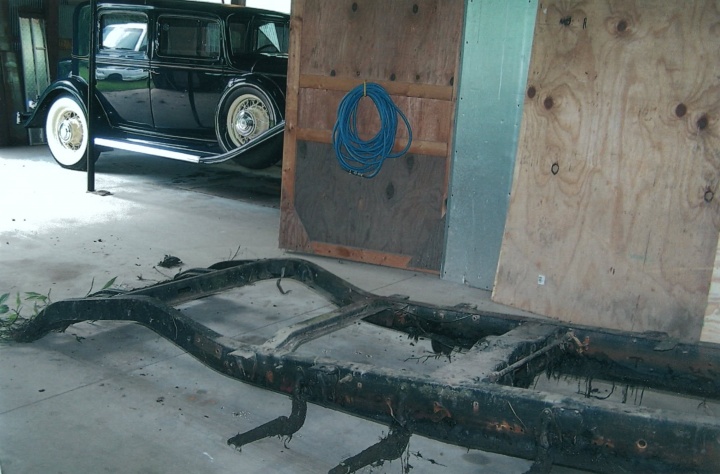 Photo #7 Made it into the barn, here pictured with the Buick the chassis provided parts for. Note the water line about half way up. The POR-15 below the water line where the frame rested down in the muck has survived as well as anywhere above the line. The mud entombed running board brackets were what kept the chassis from being dragged out. 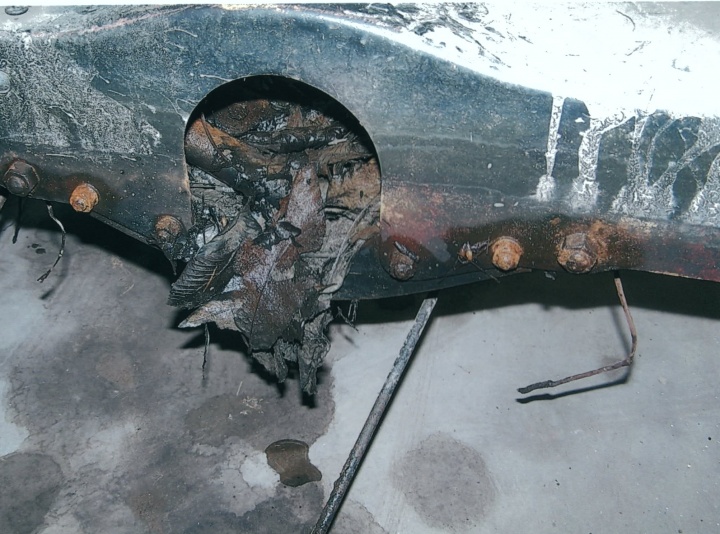 Photo #8 The center cross member showing the water line again is loaded with mud and leaves that floated in. The mud could be wiped off revealing an unbelievable POR-15 finish still paintable. After twenty years this chassis didn’t need to be re-sandblasted. 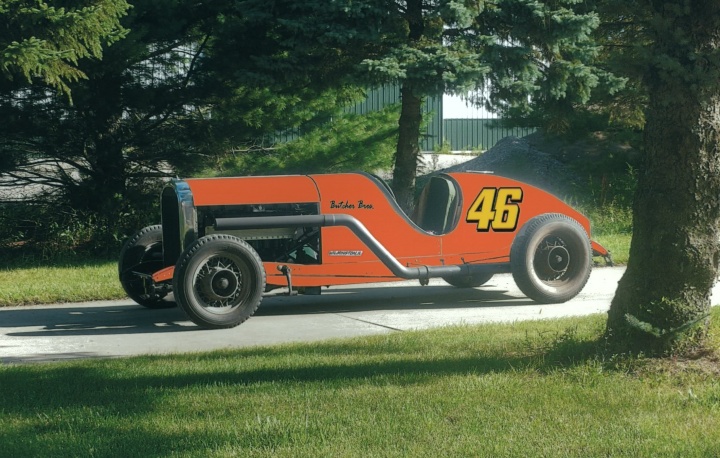 Photo #9 Here is the nearly completed chassis and newly bodied race car. This project helped me with the guilt issue of banishing the old chassis to the woods as well as recreating the #46 Butcher special and bring back some tangible history of two small town men from Wilmington, Illinois who tried hard to “get there first” at the Indy 500.

Thank you Larry for sharing your story! 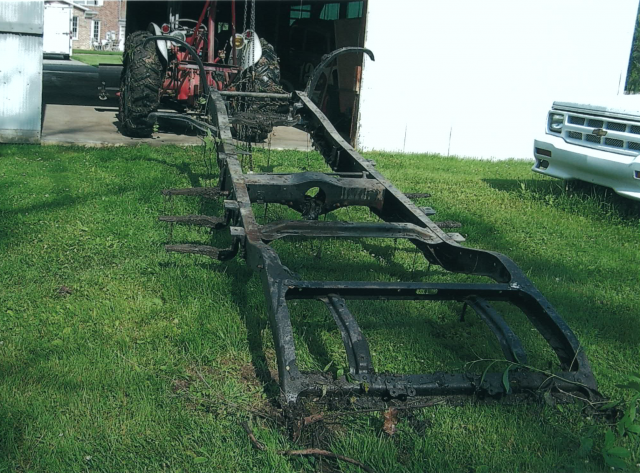